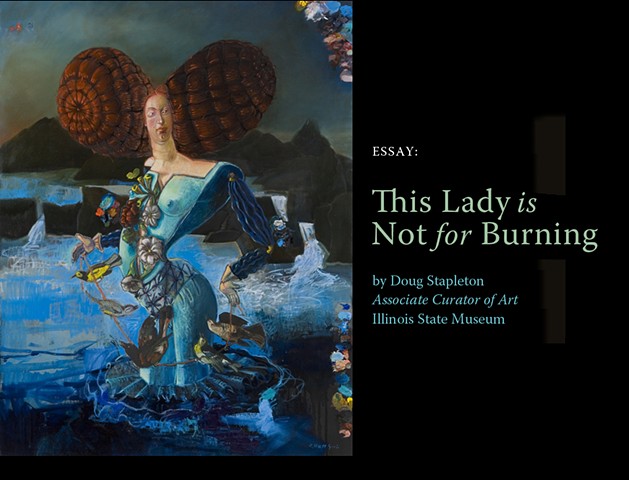 The lady is not for burning. It is a title, an assertion, and a caution. Does she not burn because she is magical, protected by spell work from fire? Or is she just too damned resilient and experienced not to fall for the pretty fictions and lies of her adversaries? Both, for She has endured in Eleanor Spiess-Ferris' paintings for over 40 years, central to the narrative but rarely ever named. She is both an Everywoman and more, extraordinary in her appearance and action, sometimes in a crowd or surrounded by a mob of detractors, but more often an isolated figure inhabiting a tenebrous world. She is a poetic diva, repeated in various guises, concentric to her sisters whose voices echo.

The Lady Is Not For Burning, a title of one of Spiess-Ferris' gouaches from 1991, re-imagines Jan Van Eyck’s fifteenth-century Arnolfini Portrait. Here the demure wife of the original painting becomes a sour-faced statue, lit by showering light; just one more saint carted around by a clownish horde. Mr. Arnolfini's head, pulled by rodeo rider Death on a hobby-horse, leads the procession. Is he her victim; John to her Salome, Holofernes to her Judith? Processions and crowds are common in Spiess-Ferris' early work and, like this piece, suggest a critique of power and prestige as a repeating, passing farce. Yet a compassionate plea accompanies Spiess-Ferris' satiric bite. We can look to another version of The Lady Is Not For Burning, Christopher Fry’s 1948 play, where a character rages against hopelessness, arguing for that glimmer of human reckoning also found in Spiess-Ferris' work:

Then if time and space Have any purpose, I shall belong to it ... the least I can do is to fill the curled shell of the world With human deep-sea sound, and hold it to The ear of God, until he has appetite To taste our salt sorrow on his lips.

She, the protagonist of Spiess-Ferris' world, is an allegorical figure at times, telling us a broader story about human endeavors-in her guise as a spirit of the hunt, of birds, of water-witnessing for tune and consequence. I’m painting a dark impression; Spiess-Ferris' work is to me a mirror darkly reflecting an unearthly world off balanced and trembling with urgency.

Fecundity, 2013, gives us a hard-working woman balancing twin swan-filled pools. She is both Justice or Balance of the Tarot, standing on delicate twig legs, harboring life, with an eye toward two approaching funnel clouds. If fecundity is powerful productivity, then it is difficult, precarious work to keep an equilibrium with all that one juggles. We witness this balancing act in Shallow Waters, 2010, and in Prairie Pond, 2007. Tears, 2007, takes work too, especially when you're filling a pond or sea. There is a liaison with water-that inland sea, our heart-and tears-sorrow and regeneration-in Spiess-Ferris' work, but rarely is this element single-purposed. Water acts metaphorically, paradox and mystery, and is often contained in awkward stasis or pitted against its elemental opposite, fire. Action and image in Spiess-Ferris' work snub cause and effect, there is never an immediate remedy, only the chance of deeper revelation.

Spiess-Ferris' figures are rarely whole creatures, depicted as fragments of a body or as hollowed skin or shell. Costuming and appearances are important in her work. I remember an earlier conversation with the artist in which she recounted a memory of clothes blown off a clothesline and caught, billowing in the trees, awakening to their own humanness. In an early work, The Small Dress, 1977, a group of disembodied outfits lounge around, vacant on chairs. This question of what animates us is central to her work. Is it our outward appearance—how we present ourselves to the world—that reflects our inner lives? Spiess-Ferris' figures, armored and constricted in cloth as tight as skin, bristle in quilted or scaled discomfort. Bodies twist, double over and distort to resemble strange bug carapaces, as in A Small Sound from 2016. Deliberate disorientation. These figures do not elicit sympathy but do act as a visceral reminder of our actions, our vanity, our numbness or dissociation between thoughts and deeds. There is something powerful for me in the contorted figures, who, like clowns and jesters, use absurdity to drive home a pinprick of recognition of ourselves.

Finally, constant companions and inhabitants of Spiess-Ferris' figures are birds. There are many birds, their chorus the voice and breath of the work. In River, 2012, they are an exposed nerve, life force on a string held suspended over flowing time. In The Sudden Combustion of a Blue Bird, 2010, it is the potential energy that is longing to explode, or as Christopher Fry wrote, the desire to “one day ... burst my bud of calm and blossom into hysteria.”