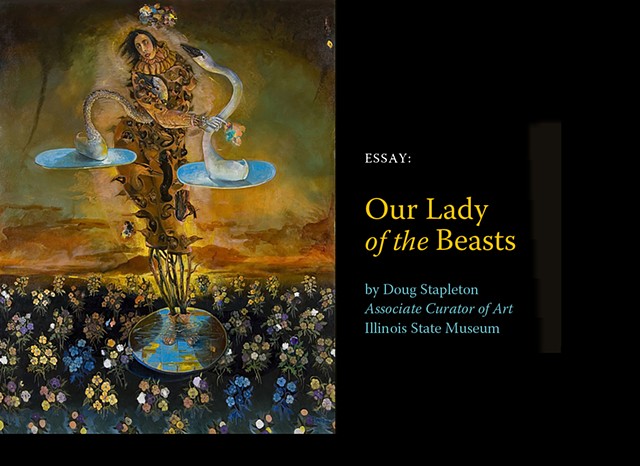 There is a scholarly convention for naming depictions of women with animals from antiquity: The Lady of the Animals. At times, she is seen standing next to, or riding, on an animal. At other times she is part human, part creature, coming down through 30,000 years of appearances in art, myth, and folktales: Isis, Artemis, Baba Yaga, Mother Goose. Whether she is a direct personification of the natural world or its protector and priestess, she is, as historian Gertrude R. Levy argues, our desire to participate “in the splendor of the beasts” manifest.

This Lady of the Animals continues her journey in the work of Eleanor Spiess-Ferris. Her women, rarely named but equipped with some extraordinary attributes, inhabit a strange, tenebrous world with her animal companions. She is a poetic diva, repeated in various hybrid guises, concentric to her sisters, whose voices echo across Spiess-Ferris’ more than 40 years of work.

Spiess-Ferris' paintings are allegory, where creatures of the natural and man-made worlds play out the tides of fortune and consequence in often absurd situations. The absurdity is in their theatricality, stage-like settings, masks and costumes of operatic proportion, and the often complex tumble of characters, which give the appearance of high comedy and satire. But the central storytelling brings us back to our own humanness and our relationship to the natural world, specifically the crisis wrought by our actions on the environment where acid rain and apocalyptic storms rage in the distance. There is a strong liaison with water—tears, sorrow, and regeneration—in Spiess-Ferris' work, but rarely is this element single-purposed. Water acts metaphorically, paradox and mystery, and is often contained in an awkward stasis or expanding endlessly under a glowering sky.

Spiess-Ferris’s figures are witnesses and actors, sometimes the main character, active with intent: listening, searching, crying, carrying huge burdens. Other times they are bystander or victim, pecked at by scavengers, poked and prodded by Picadillos —clownish demons—or other hungry beasts of desire. Her dramas are deliciously and darkly conceived, a mirror reflecting an unearthly world, off-balance and trembling with urgency. Action and image snub cause and effect. There is never an immediate remedy, only the chance of deeper revelation.

Who are her companions, these beasts and birds that accompany and sometimes inhabit the figure, and what is their part in the drama? Perhaps they are our interconnection, our intertwined fate with the world personified. There is a host of characters in her work such as her red demons, her Picadillos, that that mock and chide in the spirit of the carnivalesque, pointing out our misdeeds and foibles. They also do battle with nature, as in Garden Wars (1998), or accompany the heroine on her journey as in Passing Through (1999), an embodied consequence of our actions on a world turned uninhabitable.

Spiess-Ferris' heroines are rarely whole creatures. Ghostly shells of skin and cloth become vessels holding water, as in The Spill (2018), or unzip to sprout a flock of raucous birds as in Yellow Bird (1988). Hoochie Coochie dancers are crossbred with swans, dancing nightly for leering clowns and skeletons (Blind Man’s Bluff, 1987). Nymphs transfigure into trees, or sprout blooms, melting back into primordial swamp full pf grinning monsters as in the Taming the Monsters series. Spiess-Ferris’ heroines navigate the tamed and untamed, the wild and the constrained.

Costuming and appearances are important in Spiess-Ferris’ work. Her figures, armored and constricted in cloth as tight as skin, bristle in quilted or scaled discomfort. Bodies twist, double over, and distort to resemble strange bug carapaces, as in A Small Sound (2016). The distortion is deliberate, a visceral reminder of our actions, our vanity; this question of what animates us is central to her work. There is something powerful in the contorted figures, which, like clowns and jesters, use absurdity to drive home a pinprick of recognition of ourselves.

Finally, a constant companion and inhabitant of Spiess-Ferris' figures are birds. There are many, their chorus the voice and breath of her work. Birds inhabit her bodies, awaking from the arms of the rosy fingered Dawn in a work dated from the 1990s. In River (2012) they are an exposed nerve, a life force on a string held suspended above flowing time. In The Sudden Combustion of Blue Bird (2010), it is the potential energy that is longing to explode, or as playwright Christopher Fry wrote, the desires to “one day … burst my bud of calm and blossom into hysteria.”

Image: Eleanor Spiess-Ferris, Fecundity, oil on canvas, 72 x 56 in., Collection of the Artist