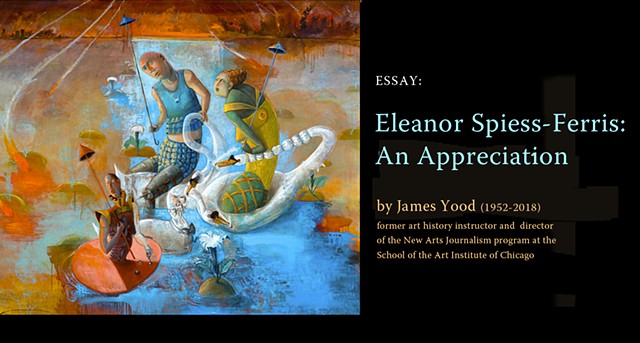 You can' t teach imagination, and for an artist such as Eleanor Spiess-Ferris that stunning ability to leap from here and now toward what and if is a central strength, the platform from which all else exudes. That's the overwhelming impression you receive in an encounter with the work of Spiess-Ferris, the shift we undergo from our world to her world, the immersion into some parallel universe when nature, animals, and humans all exist, just as we think we know them, but now functioning as integers in surprising and evocative narratives of mystery and wonder, subjected to her changeling fantasy and transformative reconsideration . From small suggestive and ambiguous playlets to larger charged and complex psychodramas, Spiess-Ferris transports us to her imaginative realm where issues of the greatest importance play themselves out, where her ruminations on all the possibilities within the human comedy find a kind of poignant pictorial voice. She's a purveyor of vision, and leads us on a merry chase after, well, ourselves.

Notice her cast of characters, the elements in Spiess-Ferris's repertoire that regularly appear and reappear over the years. The figure, of course, sometimes male, but usually female, with a vague historical air, as if they are transported from Victorian or Renaissance times, akin to commedia dell' arte actors and actresses capable of nuance within their determined roles. Nature, too, is important here, and Spiess-Ferris treats it both specifically and more generically. She insists on its occasional concentrated palpability, some flowers or trees get treated with almost a fury of precision, nature becoming a specific place often tied to the figures that inhabit it. But Spiess-Ferris also evokes Nature as a kind of tonal spiritual force, more am orphic and moody, with washy areas of paint that describe indeterminate spaces, as if you're wandering through Dante's dark wood or the forest in A Midsummer Night's Dream. Birds are almost everywhere in her work as well, preening, pricking, nesting, cavorting, instinctive foils for the humans they abut, in their lust and vanity and hunger to survive becoming just like us. And water, there 's water water everywhere in these images, pools of it, rivers and lakes and seas full of it, figures emerge from it or sink into it, their tears refresh it, it courses through and around them, an aqueous immersion offering everything but absolution.

These totems, these central recurring elements and their endless adjustment and recombination are the means through which Spiess-Ferris crafts her exquisite and strange narratives, her sometimes painful and always poignant vignettes of the course of being. What are we to do with a sInall and iconic work such as Making Pond, 2006? Making a pond, all right, here Spiess-Ferris giantess's head emerges from a small pool in the midst of a darkling forest, her copious tears endlessly and symbiotically replenishing the pond that comprises her existence. Bolts of her hair are loosely tied to nearby trees, and provide a nest for the eggs of birds that hover about. It's an image of an endless cycle of nurture and recrimination, probably more of the latter, the metaphor of bathing in one's own tears is both exquisite and sad. And yet, no matter how profound her personal agony, Spiess-Ferris's giantess must help the next generation of life, duty and sacrifice are inexorable . And there are Inore birds in Speaking With Oneself, 2008, in what becomes an aviary of mystery and transubstantiation, as woman and swan confront one another in some cryptic allegory near a wooded shore. The woman is concealed beneath a hood adorned with 27 bird's heads and tares at a swan whose disembodied head and long neck, both very real and very impossible, appear at the end of her arm. Leaves swirl about, there's an autumnal and almost elegiac mood to this a world, a mood that this artist regularly realizes.

I wish there were better words to describe the emotional tenor of a work by Spiess-Ferris, melancholic, brooding, wistful, heartfelt, poignant, tragic, tender, etc., none fully does the trick, but in some combination help to gauge the psychological temperature that she regularly achieves. The complex Inflated Egos, 2008, is so diverse and rich, it takes us to a place of dreams and nightmares, fireballs cascading from an orange and apocalyptic sky while, in a sliver of blue water, a few of Spiess-Ferris's signature actors and actresses float about on or among some very expressive swans. There's a hothouse and claustrophobic feeling here. we see broad areas of suggestive emptiness juxtaposed with an intense but ambiguous narrative episode. Why are these curiously costumed individuals sailing about, why dressed in motley and sporting inefficient and symbolic umbrellas and the like, who are they, what is their relationship to one another, are the vulnerable or somehow self-contained? More questions than answers, as is often true in the artist’s work—but images such as this provide that aperture to wonder and imagination that invite us to speculate and fantasize, to question and, finally, to surrender.

Eleanor Spiess- Ferris should be seen as amidst a great tradition of visionary women artists in Chicago, as occupying an honorable place with her fellow sirens Vera Berdich, Phyllis Bramson, Vera Klement, Ellen Lanyon, Gladys Nilsson, Hollis Sigler, Julia Thecla, Mary Lou Zelazny, etc. Yet Spiess-Ferris is of no organized school of artists; she shares with these women a quality of fierce independence manifested in idiosyncratic vision and an ability to rethink and re-present the world that exposes its frailties and plumbs its inevitable poetics and possibilities .

James Yood (1952-2018) taught art history at the School of the Art Institute of Chicago and directed its New Arts Journalism program. He wrote regularly for Artforum and Art On Paper magazines.